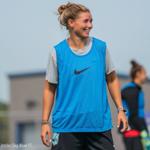 When speaking about her playing experience shaping her as a coach, Tweed said she was very fortunate to have been exposed to a wealth of different experiences and opportunities as a young player in England and now as a coach in the US. “I grew up from a really young age surrounded by some of the best players in the country that helped me fall in love with the game and instilled the competitor in me,” said said. “It was my life-long dream to be on the field as a professional and I'm lucky enough to now call it my 'job' everyday.”

Tweed is one of the most successful female coaches in the state. As the Zone 2 Girls Director for STA, Tweed has led several teams to NJYS State Cup Championships as well as spots in the USYS National League. She is also a member of the club's Girls Academy League Staff. After building the STA girls program to be one of the strongest in the region, she briefly spent time at Cedar Stars Academy Monmouth as the club’s Zone 1 coordinator.

In addition to her role in the youth space, Tweed spent time with Monmouth University Women’s soccer program, where she helped lead the Hawks to a MAAC Championship and a spot in the NCAA Division 1 tournament. Currently, as an assistant coach with Sky Blue FC, she is entering her second season with the club. Tweed holds a USSF ‘B’ License and is currently on the course to receive her 'A' Senior License. Her time spent at all levels of the game make her one of the most well-rounded coaches in the state, and part of what helps her develop so many players to play at the next level.

On her experiences with college and professional soccer and how it has helped her grow as a coach, Tweed commented: “Women's soccer has so many incredible athletes and role models. It's a really exciting time to be a young player, and to be a coach in a sport that is constantly growing and full of opportunity. I'm grateful to be surrounded by professionals in the game, who are willing to challenge me every day as a coach and as a person.”