Real Jersey FC: Developing and Preparing Players for the Next Level

Real Jersey FC founder and president Rusty Aaronson knows what it takes for a player to reach the top levels. His oldest son Brenden Aaronson is a star for the Philadelphia Union, having finished second in the league's Rookie Of The Year voting in 2019. Brenden has also been called up to the US National Team on multiple occasions. Another son, Paxten Aaronson has also been a standout for the Philadelphia Union youth academy, widely known to be one of the best academies in the country, and at just 16 years old, he recently made his debut for Union II. 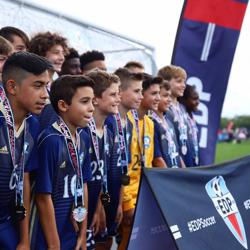 Following Brenden and Paxten's path, there have now been 15 players from Real Jersey FC that have moved on to the Philadelphia Union Academy. Most recently, Kenyon Carter ('07), Anthony Washington ('07) and Jamir Johnson ('08) have joined the Union Academy. With the high level of player development coming out of the club, Real Jersey was named one of the first clubs in the MLS clubs “Pathways to Pros" program.

"When you see kids heading over to Union from our club it's a process,” said Rusty Aaronson. "We don't get kids for a year and push them over. We work with them and their families and prepare them for what’s across the bridge, and that is pure competition in a cut throat environment. A few of our recent grads were on the cusp last year, but the Union had entrusted us to work with them for another year to develop them even further with the ultimate goal of having them move on the following year.  Fast forward a year later and now they are ready to leave us and move on to the next step. We usually get these kids young and develop them the right way.  We do not want to send kids just to send them as we want them to stick and get to the first team, so sending the right ones is a process.  In seven years we have had a few pros and Tomas Romero, who just won a national championship at Georgetown University.”

Even with top players moving on to the Philadelphia Union Academy, the club's teams are still finding success. In the inaugural year of the US Youth Soccer National League playoff, Real Jersey FC leads the East Region with teams qualified — the 06 Boys, 05 Boys, 04 Boys and 06 Girls. The 06 and 05 Boys look to follow in the footsteps of the 04 Boys who were the 2019 USYS National Champions, and the 06 Girls, who look to return Nationals as they did in 2019.

“We are honored to lead the Region with the most teams qualified for the National League playoff in March of 2021,” said Rusty Aaronson. “We believe this is a testament to the clubs ability to not only develop our talent but also attract top players from South Jersey to our program.  We enjoy representing South Jersey especially when we travel nationally.  To be able to put teams on the national stage year in and year out is something we do not take for granted. We have been fortunate to have the success we have had including our first National Championship with our 2004 Boys.  To have the opportunity to possibly compete for a National Championship with four of our teams is exciting. Although winning is not our main priority, it is great to see the hard work and the grind of the season play out with a chance at winning such a prestigious competition at multiple age groups.”