Please be aware that there is a restriction whereby no player may participate in a FYSA sanctioned competition in which heading is permitted before their eleventh (11th) birthday.

There will be no deliberate heading in all EDP games U11 and younger. Please make sure the referee assignors and referees are aware to avoid any confusion regarding this matter.

Here's a checklist of things a team manager should bring to every game:

*All players, coaches, and referees must wear a mask during the check-in process

1. Game cards will be printed by both teams and presented to the referee before every game.

2. Each team’s players and coaches shall take one side of the field, and all spectators shall take the opposite sideline. On the team’s sideline, the home team has the choice of side with respect to the halfway line, and coaches and players must stay within their side.

3. On the spectators’ sideline, spectators are to remain behind the designated line. No one will be allowed behind either goal line.

6. If a team is conclusively proven to have used an ineligible player during an EDP competition, the Competition Committee may craft such sanctions as it deems appropriate, including but not limited to game forfeit, fines and suspensions.

7. At a game, if a team believes that a player from the opposing team is ineligible, a carded coach or manager from each team will meet with the referee to review the status of the player(s) in question. This must be done prior to the start of the game.

8. Players who arrive after the start of the game may be subject to this same process, with the review occurring at half time. a. While 6) and 7) above are designed to streamline game day procedures, they are not intended to otherwise limit the Competition Committee’s ability to review an ineligible player situation at any time.

9. If there is a kit clash, the home team must change into their away uniform.

Alongside the FYSA game day guidance, EDP recommends that all clubs playing in the league follow the field social distancing regulations that are outlined in the graphic below. 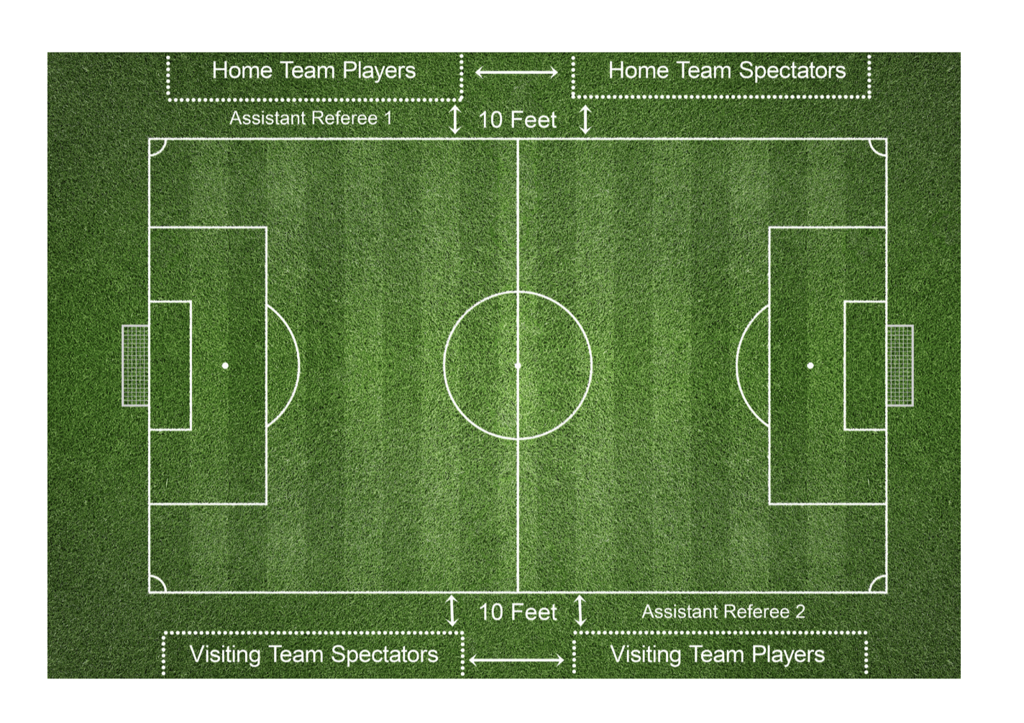 a) Primary Player - Player is carded directly to the team

b) Secondary Permission Player - Player is carded under a team with a different club, but has been approved by the primary team, secondary team and the league to be used as a secondary permission player.

Secondary carding is permitted and a player may be rostered to multiple teams at one time during a seasonal year. Regulations concerning secondary carding are as follows:

ii. Release from the primary team in no way transfers primary status to the secondary team. To transfer primary status requires a completed transfer. This player will then be considered a previously rostered player if not registered to a team within the same affiliate.

iii. Primary team schedules will take precedence in all issues or conflicts. If player is registered to two (2) affiliates, all matters regarding registration will be decided by the primary team's affiliate.

iiii. EDP DO NOT allow more than three write-ins of secondary players on the game card.

iiiii. All secondary carded players must have a USYS player pass.

Once permission is approved for a secondary player by the league they will need to be on the teams official roster on GotSoccer.  Please see below for instructions:

C) Club Pass Player - Player is carded to a team within the same club. Club pass players are eligible for League Play.

Regulations for playing up (above a player’s normal age group):

It is FYSA's policy that all players compete at a level they are capable of both physically and developmentally.

(1) Players up to 8U age groups will be allowed to roster up two (2) years provided they have parent permission and approved by the Club Board of Directors.

(2) Players in the 9U to 14U age groups will be allowed to roster up to two (2) years, subject to the restriction that no player may participate in a FYSA sanctioned competition in which heading is permitted before their eleventh (11th) birthday.

(3) Player in the 15U and older age groups will be allowed to roster up to any older age groups. There will not be an approval process in place and no exceptions to the above guidelines will be granted. Roster rules will be set in FYSA’s registration system to permit clubs to roster players that meet these guidelines. Failure to obtain proper permissions may result in the player being removed from the team’s roster and sanctions against the team/club.